After a brief overnight stop in Rangoon, an early morning internal flight, the holiday starts in earnest with three nights in Nyguanshwe a bustling town immediately to the north of the Inle Lake.

The lake is one of Myanmar's most important tourist attractions and large new developments in the surrounding hills suggest an explosive growth of interest. Perhaps the most iconic attraction the fisherman on the lake who guide their boats standing up and with a leg wrapped around an oar. The towns around and on the lake are built on stilts and support a population of some 70,000 who make a living from tourism, fishing and agriculture. The agriculture is particularly interesting with tomatoes and other vegetables growing beds of water hyacinths floating on the lake. The agriculture is relatively recent, only started in the 1960s, and agriculture and population growth is threatening the survival of the lake and the very thing that attracts the tourists. Tourists and products to sustain them are ferried around the lake at great speed in canoes powered by ancient diesel engines. It's an amazing with an uncertain future.


The hotel at Nyguanshwe, perhaps the most primitive of all the ones we stayed at was comfortable although a little noisy. The trip notes from Exodus suggest mosquito nets which was a bit not necessary as all the hotels, other than the one at Nyguanshwe had air conditioning.

Day one at Nyguanshwe is really about recovering from the journey and getting used to the light after the darkness of winter in northern Europe.  In the afternoon the group is introduced to the bikes which are with with huge heavy .  For a warm-up ride we take a trip to a local vineyard for a wine-tasting.  For the time being at least the Australian wine industry has nothing to worry about. 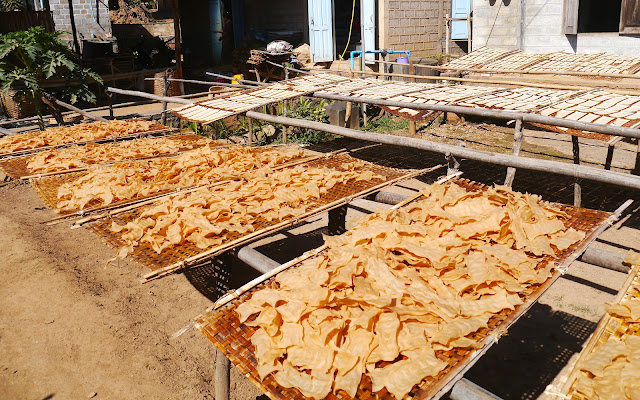 Day two was one of the best days the whole trip and combined a good cycle ride (54km) with some really interesting visits.  Halfway through the morning we dropped into a village where all manner of agricultural produce was being dried and prepared.  Particularly tasty was the split pea is essentially the same as standard but much better and with a real of its own.  The market, which travels around the lake, provided further photo the woman adorned in folk costumes.  I particularly liked the ones in a black dress and red head scarf representing an ethnic group descended from dragons. We then visited the Shan pagoda complex and got exposure a huge site and experienced for the slavish repetition that features in Buddhist culture.


After lunch we got our ride on the lake.  In what felt like a cross between a speed boat, and a canoe, and propelled by a diesel engine, we shot along shallow canals and out onto open water.  It didn’t exactly feel ecological but it was great fun and meant we could get close to the fishermen and see them steering their boats with legs wrapped around their oars.


On Day 3 cycling took second place at least, after a 25km ride the sightseeing was from a boat.  Particularly interesting was the Phaung Daw Ou Pagoda home to five sacred Buddah statues.  These ‘statues’, which go on tour around the lake in a major annual ceremony, are growing all the time as visitors attach, paper mache style, ever increasing quantities of gold leaf to them.  Also interesting was weaving where cloth was made in an incredibly laborious process from the stems of lotus flowers.


On the boat journey wandered through the villages along narrow canals past ramshackle houses suspended on a and floating ‘fields’ growing tomatoes, beans and gourds apparently producing up to four crops a year.
Posted by John Hayes at 9:53 AM

Email ThisBlogThis!Share to TwitterShare to FacebookShare to Pinterest
Labels: Burma by Bike, Myanmar