Today was immense: a mix of beautiful and awful in equal parts.
The first thing we learnt was the importance of conditioning expectations. Neither of us had really studied today's Ruta de la Plata itinerary and I had foolishly assumed, on the basis of yesterday's road signs, that it was a 40k gentle roll downhill to the coast at Gijón. How wrong can you be?
No sooner were we out of the hotel door when we turned off into a tiny side road climbing vertiginously up the mountain side. After a terrible hour of bottom gear (or, in my case, some walking), past tiny mountain hamlets and disused iron mines, we got to the top. A road sign then explained that we were on some mad Spanish cycling endurance route. Thanks for telling us!

The dividend was a steep downhill whoosh which reminded me off the scary descent from Ooty Hill in Tamil Nadhu minus the potholes. Cold and shaken we stopped for coffee in La Pontialta then followed a more civilised route on a gentle descent. 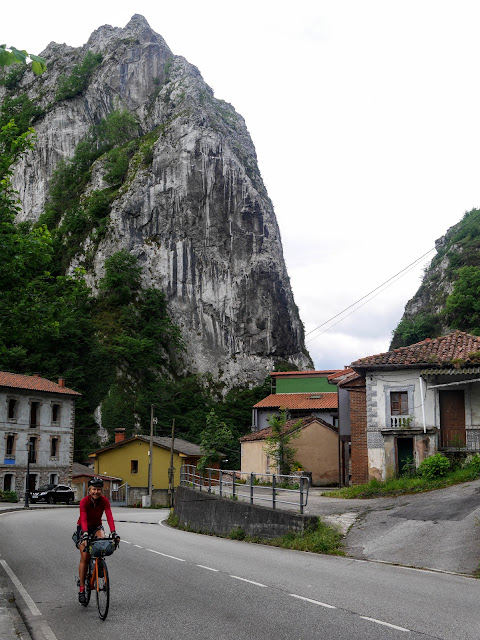 The next section was amazing, on a quiet road through a dramatic limestone gorge. Scenically this was probably the best bit of cycling of the whole trip.
Then things got tiresome again as we climbed and wiggled about to finally reach the outskirts of Oviedo. We skirted the town centre by the most devious and annoying route imaginable including several steep climbs: without GPS you wouldn't stand a chance. Eventually it felt like we were winning and, emerging from the maze, we treated ourselves to a 3 course menu del dia from an unassuming suburban restaurant. 3 hearty courses for €8.50 each.

The locals were all drinking cider, a bottle per table, but the pouring ceremony (the waitress takes the bottle, puts the glass on a special pouring stand and then raises the it high with an outstretched arm to pour a couple of inches into the glass) was great entertainment. It reminded me a bit of the way they pour mint tea in Morocco.
After lunch we did more up and downs on roads you would never normally dream of going on. There was a perfectly good road to Gijón in the valley bottom, with heavy traffic perhaps but with a wide hard shoulder for bikes. The designers of the Ruta del Plata appear to have a masochistic streak however, and if there was a steep hill available then it had to be climbed.

About 6 hours after leaving our hotel we reached a hilltop and could see the sea. From there it actually was downhill all the way.

This account covers the awful bits in some detail. To compensate I have to admit that we went through some stunning scenery. The Asturias are very beautiful with dramatic mountain peaks on every horizon and unspoilt valleys and hillsides covered with very green grass and wonderful trees. It is intensely rural apart from some old iron and coal workings and the tiny hamlets you pass through are full of traditional charm.

Despite these aesthetic delights we were relieved to hit a hard urban bike path taking us to the doorstep of our town hotel in Gijón.

You can't go any further north than Gijón, we have reached the sea and the end of the Ruta Vía de la Plata. It's been an amazing trip, the whole Big Iberian Tour in general and the ride up from Seville in particular.

The last day was a difficult and, without doubt, the hills in the Asturias make for challenging cycling. Perhaps the one big disappointment was that the N630, an old friend and tour companion, sneaked off on the final approach to Gijón. I was hoping that the kilometre markers, which we had tracked from the outskirts of Seville, would take us all the down to 0 once we arrived in Gijón but sadly it was not to be. The last one we saw told us it was 38km to Gijón, the circuitous route we actually followed through the city's blast furnaces , was more like 50.

We are catching the ferry home to Portsmouth via Santander and made the journey there from Gijón by ALSA coach. ALSA is the national coach operator in Spain with an amazing network (our bus was heading onto Barcelona). Putting the bikes on the bus was more complicated than it had been with the local operator we used to get to from Bejar to Salamanca but nonetheless totally successful. The bike had to be bagged (ALSA bags available for 12 euros) and on a journey of about 200km we had to pay 10 euros for each bike).
The end of the Ruta Vía de la Plata is marked with a statue of the Emperor Augusta who stares east across a beautiful sandy bay in Gijón. We took a picture of him with our bikes. These unsung heroes are now due for a rest but not for long. In a couple of weeks time they will be on an overnight train heading to Aberdeen in readiness for the start of our next adventure.
Posted by John Hayes at 6:48 PM