In May 2017 I cycled the Ruta Vía de la Plata from Seville to Gijón with Christine. It was the first time we've cycled in Spain but on the basis of this experience we'll be back. It's a brilliant route. 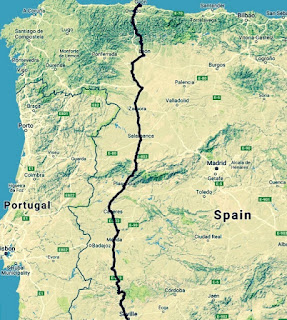 Spain hasn't invested in a cycling network like the French and doesn't have the equivalent of the Véloroute network or even the UK's Sustran trails  – both of which often use canal paths and abandoned railway lines – but does have a relatively empty countryside.  It also has the best transport infrastructure in Europe, and its new network of intercity motorways and rail connections mean that the local roads are virtually traffic free.  It is a biker’s paradise.


I don't know if the Ruta Vía de la Plata is a typical Spanish cycling route but it does work really well. It's based on an ancient route, older even than the more famous Camino de Santiago.  Although a route existed before the Romans arrived they developed and paved it (‘Plata’ derives from the Arab word for paved).   The Roman version originally went from Merida in the south to Astorga in the north and was used for the conquest of Iberia.   The Arabs, arriving in the 8th Century, also recognised the route’s strategic and commercial value, and the Christians employed the road again for their conquest in the 13th Century.  Over time it became the main way of getting from the south of Spain to Santiago de Compostella and is now an alternative route to French Way for pilgrims going there.  Although much of the original route survives in one form or another, the modern manifestation is longer and has been extended south to Seville and north via Leon (a more important city than Astorga) onto Gijon.

So why was cycling onto the Ruta Vía de la Plata such a fabulous experience and what makes it special?  Two reasons stand out – one historic and one modern.
Historically the route brought wealth to the towns and cities it connected, particularly once Spain got into the America’s and gold and silver flooded into the country via Seville.  The modern traveller benefits enormously from this legacy, with the next stunning town or city usually no more than a day’s bike ride away.  I’ve been to Seville before and it’s an amazing city, but there is so much more to see on the Vía de la Plata as it visits Zafra, Mérida, Càceres, Palencia, Salamanca, Zamora, Leon and Oviedo.  Four of these cities have UNESCO world heritage sites while Zamora has the world’s largest concentration of Romanesque churches and Leon one of its most beautiful Gothic cathedrals. There is a huge range of accommodation – from Paradors and private hotels in old palaces to more humble family run hostals – and, despite currency fluctuations, Spain is still great value for money.
The modern reason for the Ruta Vía de la Plata cycling excellence is not so obvious.  Spain, as mentioned already, has transformed its transport infrastructure. When the government decided that the 20th Century version of the Ruta wasn’t up to 21st Century standards, instead of upgrading it – widening the road and turning it into a motorway – they replaced it and built a new one.  The old N630  (N stands for ‘national’) is still there but traffic has deserted it, preferring to thump along the new motorway, leaving the N630 virtually empty for cyclists and a few local users.

Towns along the route have recently formed an Association to promote cycling on the route, with a website containing useful information. I found this an invaluable starting point for my trip.  The site offers two routes – one for off-road mountain bikes and one for road bikes – and itineraries, which naturally promote the towns forming the association, are suggested for both routes.
I approach long-distance cycling in the same way as I approach long-distance walking.  I sleep every night in a bed rather than a tent, and finding interesting accommodation and enjoying the local food is a key of part of my travel experience.  When walking I hardly carry anything, and although a bit of fine-tuning was needed my bike set up is the same, lightweight and flexible.  In Spain everything was squeezed into an oversized saddlebag but I had enough in it to comfortably switch from cycling to sight-seeing and restaurant dining.  I followed the road route but I don’t think the mountain bike route is hard-core (it follows the pilgrim route) and with fatter tyres, my bike (a ‘gravel bike’) could have coped with it.
My wife (Christine) and I went from Seville to Gijon in 12 days, a total distance of 930km.  We cycled it in May and enjoyed perfect weather, but I suspect anything much later would have been too hot.  Despite having to cross three mountain ranges – the Sierra Morena, the Sierra Gredos and the Cantabrian Mountains – and a combined age horribly close to 130 years - we found it an easy route.  The thing that surprised us most were the climbs.  Spain is the second most mountainous country in Europe and we were mentally prepared for hard work but, apart from a tough final day, none of the stages were particularly difficult.  What made it so do-able was the N630, which, before the motorway, was an important route for big lorries: so while some of the climbs were long they were generally beautifully graded. There was one exception to this general rule and this was the descent from the Llana del Puerto over the Cantabrians.  In just 13km the route drops over 1000m down a stunning valley into the Asturias and the heart of green Spain.  The descent was breath taking with sharp hairpin bends demanding good brakes, great fun but it was good job we weren’t going the other way. 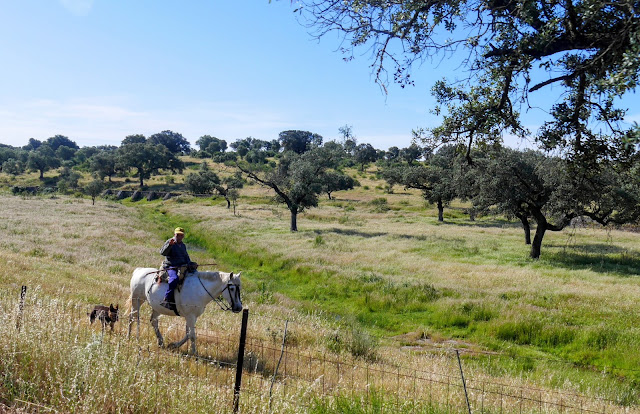 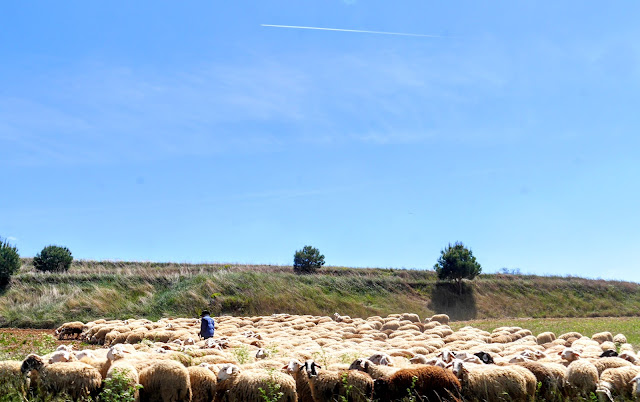 The scenery in general favours the cyclist.  It’s huge and wide open and distinctively Spanish.  Population here tends concentrate into little towns spaced 15 to 20kms apart and although the scenery and land use changes, its ‘emptiness’ in terms of people, is a constant. Although the pilgrims heading to Santiago outnumber the cyclists there journey, with lots of hard hot surfaces, looks like a slog compared to those of us on two wheels.

Although we followed Ruta Vía de la Plata road variant we did modify it.  For some reason, perhaps to provide variety, the website itinerary deviates from the N630 in places onto small local roads or stretches of gravel.  Not mentally prepared for gravel we usually switched back to the N630.  Also the stops (favouring the towns behind the website) didn’t always make sense and our schedule made sure we so we visited the main historic towns en route. 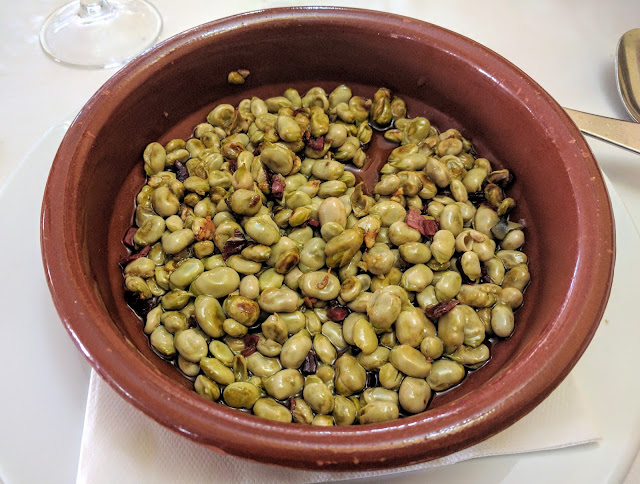 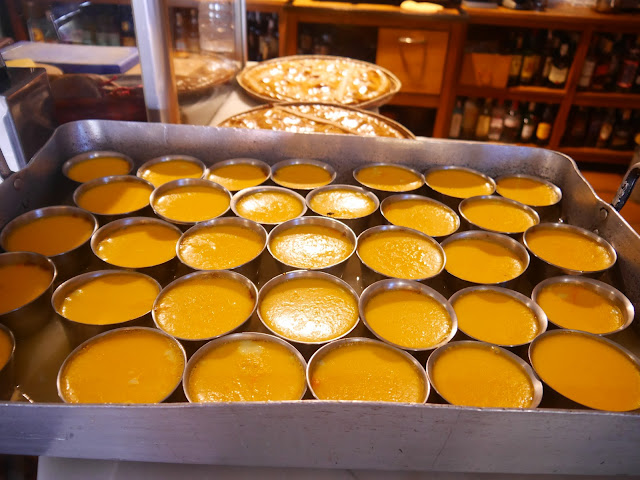 Despite have walked somewhere near 5,000 km in Spain, its daily rhythm, and relatively late eating times, took a bit of getting used to on a bike.  We were burning a lot of calories and getting the pit stop strategy proved critical to good mood maintenance.  Once we accepted the need to stop every hour or so, enjoy the huge choice of excellent bars of cafes in the little towns (so much more choice than in the UK or France) things improved dramatically.   After one or two coffee and cake stops in the morning we planned our days so we could get to our destination or near it in order to eat a substantial late lunch (between 1-30 and 4pm). Lunch was our main meal of the day, as it is for the Spanish. There is no need to eat dinner in the evening (which sometimes doesn’t start until 9pm), as beer and tapas were always available.  This way we could hold onto one small Anglo-Saxon tradition and get to bed early.

It’s hard to find a cycling route that matches all cycling styles but the Ruta Vía de la Plata makes a good effort. It’s great for road bikers who want to eat miles on empty, well surfaced roads.  It also works however for a cyclist who wants to mix it up a bit and adopt a more traditional touring approach, or for mountain bikers who want to stay off-road.  There are also plenty of options in terms of itinerary and length of trip.  Instead of going to Gijón on the north coast of Spain you could follow the pilgrims and other cyclists who in ever increasing numbers use the Ruta Vía de la Plata and head to Santiago de Compostella.

So if like me, you appreciate the sites, sounds and tastes of Spain, but didn’t think you could combine it with 2 weeks cycling, than think again – have a look at the Ruta Vía de la Plata.

If you're interested learning more about our trip, have a look at the daily diary entries.

Email ThisBlogThis!Share to TwitterShare to FacebookShare to Pinterest
Labels: Cycling, Cycling in Spain